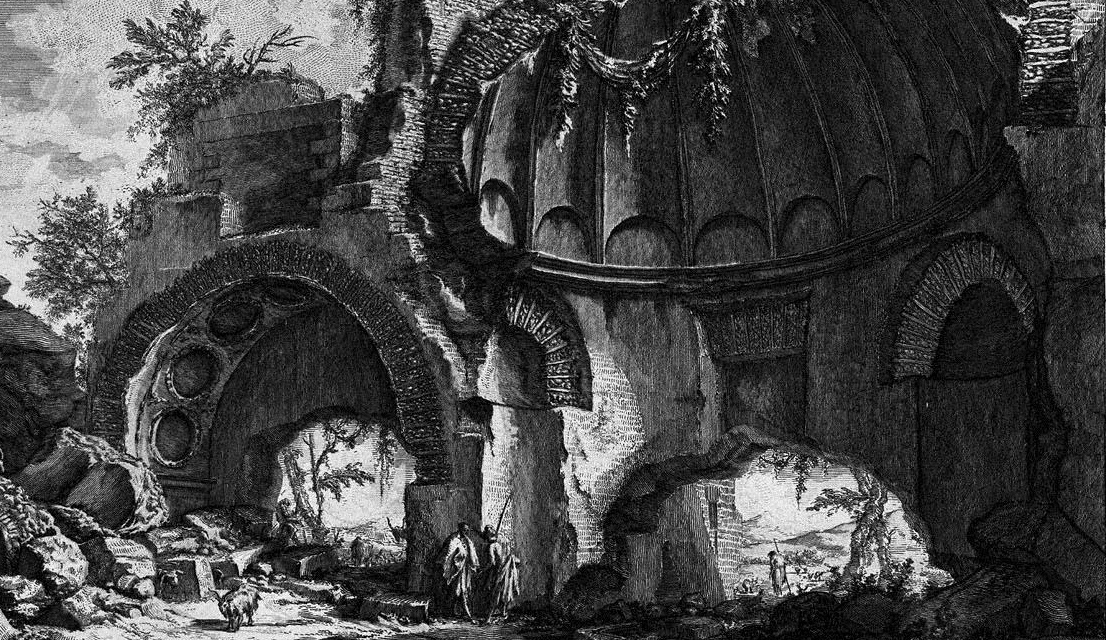 Giambattista Piranesi (1720-1778) was arguably the finest intaglio printmaker of the 18th century. He worked essentially as an etcher, but also employed engraving and drypoint techniques, and experimented with the inking and printing of his plates to achieve the complex, multi-textured images he wanted. As a draughtsman his architectural training was rather overwhelmed by his flamboyant, romantic, exotic and at times chaotic imagination. His depictions of buildings are beautiful, but inaccurate, and peopled with ragged, miniature human beings (partly to emphasise the scale and grandeur of the architecture). Piranesi’s ‘archaeological’ works are a great deal more valuable as art than as archaeology.

He was also a great controversialist, and engaged in bitter disputes with several contemporary historians and potential patrons, some of which gave rise to publications in defence of his (often quite untenable) position. Visitors to Rome, including British grand tourists, would often stop at Piranesi’s shop and buy a selection of his etchings or, if they could afford it, a complete set of what was then available. Piranesi’s works were expensive in their own time, and have long been regarded as high points among plate books, with good and complete copies commanding high prices.

The ‘set’ of Piranesi’s works at Balliol is substantially complete for the period in which it was collected. The provenance is uncertain, but the ten physical volumes containing 18 separate works date from the same approximate period and were probably acquired together in Rome around 1770. A few of the works are in earlier states, datable to the earlier 1760s, but it is likely that all were acquired at the same time. There is a full set of the archaeological works of the period, including an excellent early example of Le antichita Romane (4 vols, 1757). Piranesi’s two great imaginative works, the Carcere d’invenzione and `Grotteschi’, are also present in contemporary states, and his earliest plates are represented by copies of Antichita Romane de’tempi della Republica (dated 1748) and the Opere varie di architettura prospettive grotteschi antichità (first published in 1750).

Among his works on interior design and decoration, there is a fine copy of Diverse maniere d’adornare i camini (1769) and an interesting set of eighteen plates from Vasi, candelabri …, which probably represents the state of this work at the time the plates were acquired (the Vasi was an open-ended series, not completed until after Piranesi’s death in 1778). Also present is the artist’s Osservazioni di Gio. Battista Piranesi sopra la lettre de M. Mariette aux auteurs de la Gazette littraire de l’Europe (1762), one of his controversial publications, in this case attacking Pierre-Jean Mariette.

The only major work of this period not found in Balliol is the Vedute di Roma, a group of large views published as an open-ended series from around 1748 (and completed after the artist’s death by his son Francesco; the series ultimately consisted of 137 plates). Also absent are two later works, the Trofeo o sia magnifica colonna coclide di marmo … fatte da Traiano (1774) and Differentes vues de quelques restes … de Pesto (1778). The Vedute may never have been present in this set, or it may have been broken up and the individual plates framed (as was sometimes the fate of copies of this work in the nineteenth century). The Balliol set was uniformly bound in half calf, probably in the latter half of the nineteenth century. The final volume in this set (925 a 10) is damp-stained, but the rest of the set is in excellent condition.

The Balliol ‘set’ of Piranesi’s works