Our Wellcome Trust funded project to catalogue and conserve Nicholas Crouch’s Library has just entered its second year. Let’s look at what has been achieved so far.

All planned conservation has been completed. Nikki Tomkins, from the Oxford Conservation Consortium, cleaned and, where appropriate, made protective boxes for just over 400 books. A further 159 received more in-depth treatments, from minor binding repair to complete re-backing. All treatments were sensitive to the integrity of the original binding. So although Nikki’s work has stabilized the bindings to the point where we can use them without fear that they will crumble apart in our hands they will never be as good as new. Nikki reflected on how best to make future readers aware of the limitations of the bindings and encourage good handling practice in order to ensure their preservation. She came up with this augmented shelf mark label with clear information about where the binding is weak and how to handle it sensitively:

Nikki also gathered together detailed information about the construction and decoration of the bindings she worked on. This, together with Crouch’s notes of the binder and the cost of binding, will be a rich resource for discovering more about how the collection was used and about seventeenth-century binding in Oxford more generally. Nikki presented her work at talks for a Book History Research Network Study Day on 21 April 2017 and Balliol’s Unlocking Archives series on 24 May 2017. Nikki will also be talking at the Copenhagen Care and Conservation of Manuscripts conference next April.

Our project cataloguer, Lucy Kelsall left Balliol in March 2017 to take up the post of Florence Fearrington Rare Materials Cataloger at the Rare Book School based at the University of Virginia. This was not before she had made catalogue records for a staggering 3,076 items bound in the 413 sammelbands in the collection. As she worked, Lucy brought together information about the collection in a variety of formats, taking images of interesting annotations and recording statistics about the volumes in a comprehensive spreadsheet. Some of her discoveries were presented in an Unlocking Archives talk on 9 March 2017 and others in posts for the Library’s Historic Collections blog. Lucy and Nikki discussed their work on a University of Oxford Podcast in conversation with Balliol Fellow, Adam Smyth.

Lucy’s cataloguing revealed that Nicholas Crouch wrote shelf marks in his books. So staff turned detective and identified around 106 more volumes on our shelves that bear Crouch’s probable provenance.  Finding a cataloguer to finish off the project at short notice could have been difficult but Sophie Floate, who is cataloguing collections at Brasenose, Corpus Christi and Harris Manchester, kindly made some time for to help us out. She has currently made around 300 records.  This leaves around 70 bibliographic items left to catalogue before the end of the year.

One of the most interesting finds of the project has been the identification of several lists of books in Crouch’s handwriting.  These include a list of books he lent and who borrowed them, running from 1653-1689. 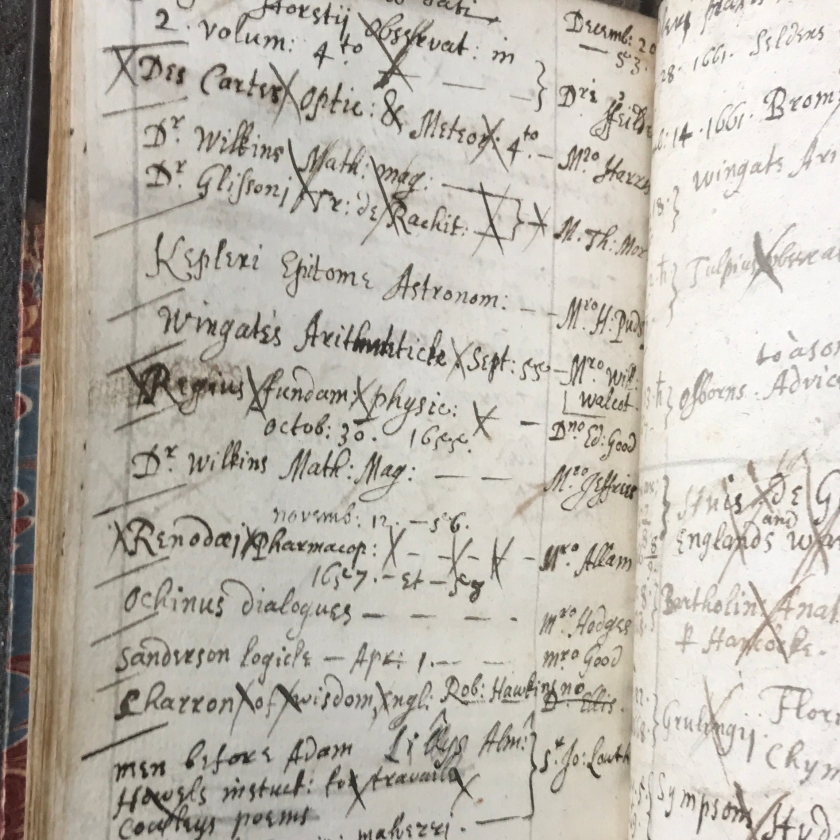 James Howarth, Assistant Librarian, made a transcription of this list and a comprehensive attempt to identify the individuals and the books that Crouch noted. Nicholas Crouch’s entry in the Donation Register has also been transcribed and many of the titles matched with books in Balliol’s collections.

Thanks to our Archivist, Anna Sander, images of all of the manuscripts in Crouch’s collection are on the Balliol Archives Flickr page and descriptions of many of them are now available through the Archives Hub.

Though the project funding has allowed us to go a long way towards making this fascinating collection accessible, there is still more to do. In terms of conservation, Nikki has identified a further 92 of the sammelbands that ideally would have some form of treatment to allow us to handle them without causing damage. The conservation of Crouch’s books will continue, feeding into our ongoing program of conservation. This has already begun with a condition survey of the 106 newly identified volumes.

With conservation and cataloguing nearing completion, we can move to the next stage in making Crouch’s Library accessible. We will actively promote it through an exhibition and related talks planned for Autumn 2018. We also hope to hold an academic conference around the project and to find ways to fund future academic research into the collection.

Coming towards the end of the project, it seems as if we have uncovered lots of fragments of a historical artefact – Crouch’s library (or libraries). Now we need to hold them out to be viewed from different angles, pieced together and made sense of. It is also likely that there are still more pieces of the puzzle to discover: books belonging to Nicholas Crouch offered in his bequest but not put into the College Library; documents relating to Crouch and his family in other archives; traces in the landscapes Crouch inhabited such as his family house at Higham Gobion.

As you can see from the number of contributors mentioned in this report, this has been a truly collaborative project. In Nicholas Crouch’s reconstructed library, there is still further work to be done by many more minds and hands. 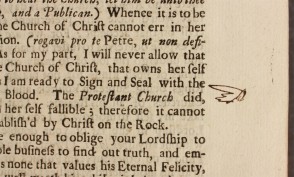