As Halloween approaches and we look around for tales of the uncanny to send shivers down spines, we might turn to Charles Dickens. There are supernatural happenings aplenty in the complete run of Household Words that Balliol has acquired through the generosity of alumnus, Michael Rhodes (matriculated 1958). Harry Daniels, studying for a DPhil in English at Balliol, reflects on the significance for our times of Dickens’ journal, both homely and unheimlich:

Balliol College Library has recently been gifted a complete run of Household Words, the weekly magazine edited and jointly owned by Charles Dickens from 1850 to 1859, which published works by Dickens himself, Elizabeth Gaskell, Leigh Hunt, George Meredith, Elizabeth Barrett Browning, and Harriet Martineau, amongst others. Though we must regret we cannot yet see the volumes in person, the sentiments behind Dickens’s venture might still afford us pause for reflection on our new life in ‘households’ within College. 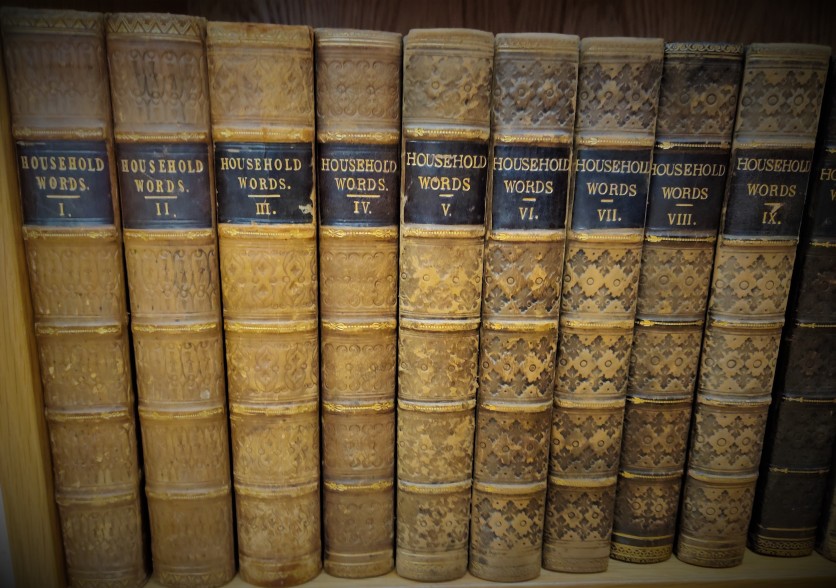 In recent weeks and months, the word ‘household’ has become a more familiar acquaintance of our lips, ears, and eyes than ever before. In the works of Shakespeare as much as Dickens (both authors being, of course, two of the most obvious examples of household names), the word stands for the most familiar. In Shakespeare’s play, King Henry V exclaims to his troops outside Agincourt that their ‘names’ will become ‘familiar in [the] mouth as household words’ after they succeed in France. But now, like the face of a childhood friend long forgotten when encountered by chance upon a street corner, the word ‘household’ has taken on a strange, uncanny guise as it now greets us out of the televised mouths of government. In Oxford, as in many places elsewhere, the necessary restrictions to deal with the coronavirus pandemic have grouped and divided us into corridor and staircase ‘households’. Perhaps like Pip at the end of Great Expectations, we find ourselves in a quasi-familial position to persons we had not quite expected to earlier in the year.

But we might turn to the pages of Dickens, and in particular the sentiments behind Household Words, to work through the harder times of the period we’re now living through. While many of us have been barred from extensive travel (with many conferences cancelled and far-flung holidays forgone), Dickens teaches us to find pleasure and interest in the everyday, in what is already familiar to us. Dickens hoped that the magazine would ‘show to all, that in all familiar things, even in those which are repellent on the surface, there is Romance enough [sic], if we will find it out’, as he wrote in his ‘Preliminary Word’ to the publication.

Interest in all aspects of the everyday, as embodied by Dickens’ journal, is also reflected in the breadth of study and research that occupies members of the College. This set of books will be with the College community, to inspire and inform us, long after the current crisis is history. Just as Harry sees relevance today in Dickens’ nineteenth-century endeavour, future members of the College ‘household’ may find consolation, interest and amusement in these words and those of the other books kept in the Library for posterity.

It is tempting to conflate a writer’s personality and the work they produce, but this can give us an incomplete picture of who they really were. The great literary scholar Andrew Cecil Bradley (Balliol 1868) is best remembered for Shakespearean Tragedy, a work of ‘high seriousness’ that profoundly influenced 20th century Shakespearean criticism; but the Oxford poetry professor also had a playful side. In the poem ‘Were I but fat’, Bradley expounds on the many benefits of portliness: ‘Were I but fat, I should not freeze … Wives should be mine, and properties’.

The possibly unpublished poem was Bradley’s contribution to a friendship book recently acquired by Balliol Library as part of its continuing effort to collect the intellectual history of the College. It was compiled by Balliol alumnus, poet and clergyman Henry Charles Beeching (Balliol 1878) between 1889 and 1899, with two final pieces contributed in 1939. Friendship books, or liber amicorum, are personal albums to which the owner’s friends and loved ones contribute verses, drawings, photographs and personal inscriptions.

Bradley had been Beeching’s tutor when he was an undergraduate in Balliol from 1878-1881, and from the inclusion of the poem in the friendship book we might infer the two were quite close. Balliol at the time was under the Mastership of Benjamin Jowett who emphasised academic brilliance but also encouraged more informal and close relationships between tutors and students.

Congenial though the environment was, superiors were still to be respected. While Beeching was an undergraduate he contributed to the Masque of B-ll—l, a booklet of verse that poked fun at the students and Fellows of the College. Perhaps tame by our standards, it was quickly suppressed although a few copies remained in circulation. It was later published in 1939 by Basil Blackwell as Balliol Rhymes [Balliol Library, 68 e 33]. The most famous verse portrays Jowett as a pompous know-it-all and is attributed to Henry Charles Beeching:

‘First come I.
My name is J-W-TT.
There’s no knowledge but I know it.
I am Master of this College,
What I don’t know isn’t knowledge.’

One of the most visually arresting contributions to Beeching’s friendship book is Lucius Smith’s wonderful musical notation. Smith, a contemporary of Beeching’s at Balliol, was immortalised in the Masque as ‘Lucy …the Archbiaconate’ , particularly apt considering that he went on to become the inaugural Bishop of Knaresborough. The author of that verse and many more in the Masque was poet J W Mackail. Mackail and Beeching were part of a literary circle at Balliol that also included J B B Nichols and the three friends later collaborated on two published volumes of poetry. Both Mackail and Nichols contributed poems to the friendship book. In ‘Winter is over’, an unpublished poem dated 1889, Mackail describes the end of winter and spring’s return: ‘poppies & great white daisies in the dew/ morning by morning are uncurled anew’. Nichol’s ‘Pastel’ was later published in Love’s Looking Glass, one of the collections on which the three friends collaborated. Beeching’s own poem, ‘The robin in January’, which also features in Love’s Looking Glass is included here under the title ‘Hey robin, jolly robin’.

Other contributions speak further to the circles in which Beeching moved, and include poems by poet laureate, Robert Bridges whose niece, Mary, married Beeching in 1890, as well as writer and social reformer Annie Matheson. Matheson wrote one of the first biographies of Florence Nightingale, a close friend of Benjamin Jowett’s to whom, rumour has it, he proposed unsuccessfully.

Many of the contributions are initialled rather than signed and so we can only guess at their origin. Beeching’s daughter Helen Fanning speculated on the identities of the unknown authors were and her guesses are slipped into the front of the book. Others remain tantalisingly unknown to us including the contributor of a piece in Hebrew. 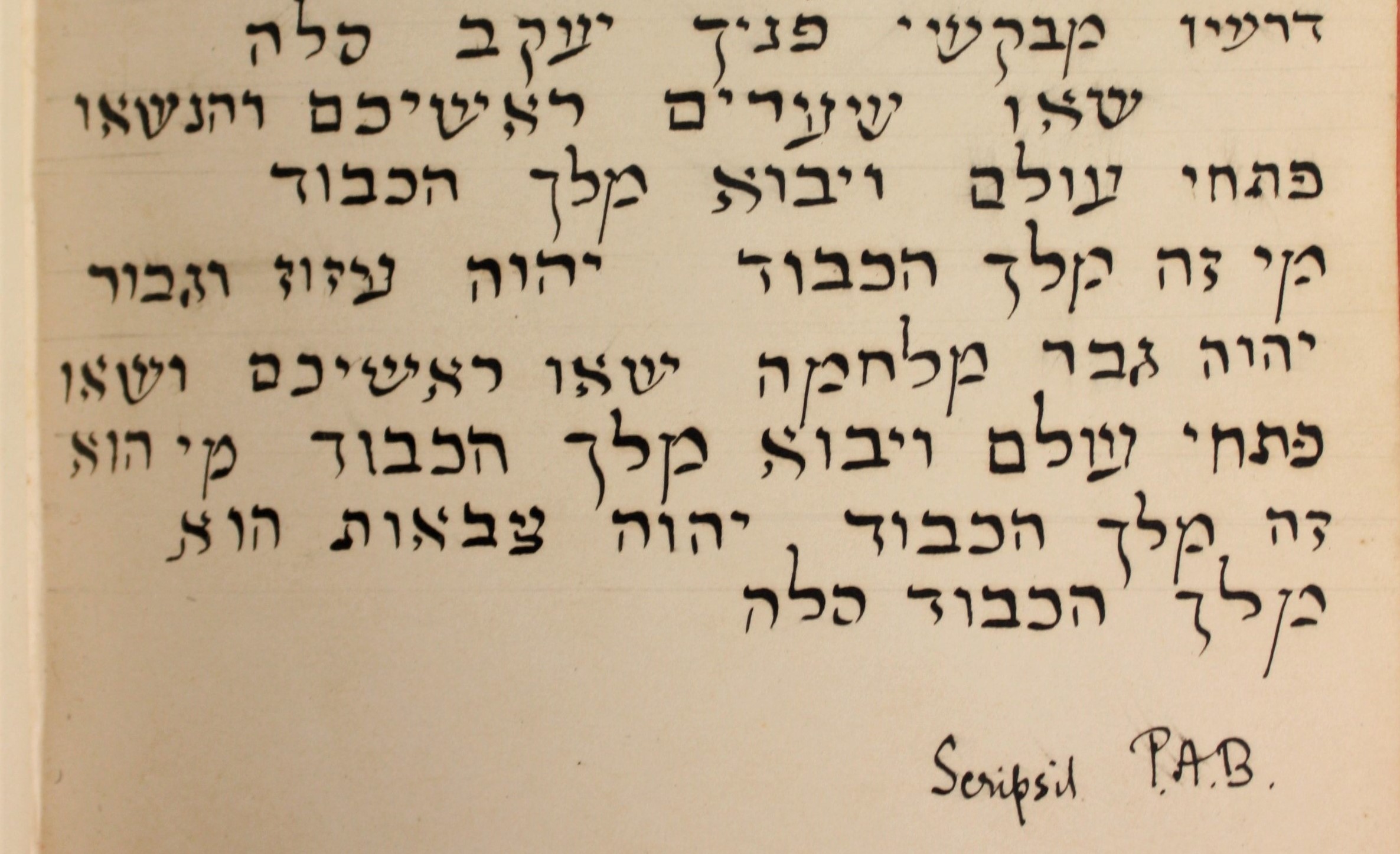 A detailed record for Beeching’s friendship book is available on the Balliol College Archives website.

Friendship books may have been in their heyday in the 16th and 17th centuries, when they functioned in a similar way to social networks today, but they continue to be revived and re-imagined in the virtual world such as this 21st century incarnation, produced by graffiti artists in LA and inspired by rare books.

The Library has recently purchased A.C. Bradley’s manuscript of his lecture on ‘Inspiration’ – what is meant by it and what value it has to society.

A.C Bradley studied at Balliol from 1868 having won an exhibition (a type of scholarship). He was elected a Fellow in 1874 and was a popular teacher in English and Philosophy. Balliol’s manuscript collections show Bradley’s involvement in the intellectual life and politics of the College during his time here; forming friendships with T.H. Green and R.L. Nettleship and earning the opposition of the Master, Benjamin Jowett. The latter is hinted at in Bradley’s entry in The Masque of B-ll—l, forty satirical poems about Balliol members printed as a broadsheet in 1881:

‘Inspiration’ was first given as an address in a Church in Glasgow, where Bradley was Regius Professor of English Language and Literature at the University from 1889. He held the post until 1901 when he returned to Oxford as Professor of Poetry. Bradley’s address formed the basis of the essay of the same name in his book, A Miscellany (MacMillan, 1929) [Balliol Library: 47 g 26 Ground Floor].

Throughout the manuscript, Bradley crosses out and rewrites as he tackles the question of what is meant by ‘inspiration’ in the secular context of poets and other thinkers. Bradley identifies three conditions of inspired thought. Firstly, that it is new; secondly, that it strikes the thinker as superior to their habitual thoughts; and thirdly that it should come upon them suddenly. He goes on to identify a paradox about the perceived origin of inspired thought which he feels is a point of comparison to religious inspiration:

The manuscript has been bound in boards covered with grey paper and contains the bookplate of Glaswegian publisher and bookseller James J. Maclehose, designed by Sir David Young Cameron. It joins other manuscripts by A.C. Bradley at Balliol including the rare survival of an undergraduate essay, with the title ‘Does Literature tend necessarily to decay?’ and academic papers on Shakespeare’s work, the area of criticism for which Bradley is most famous today.